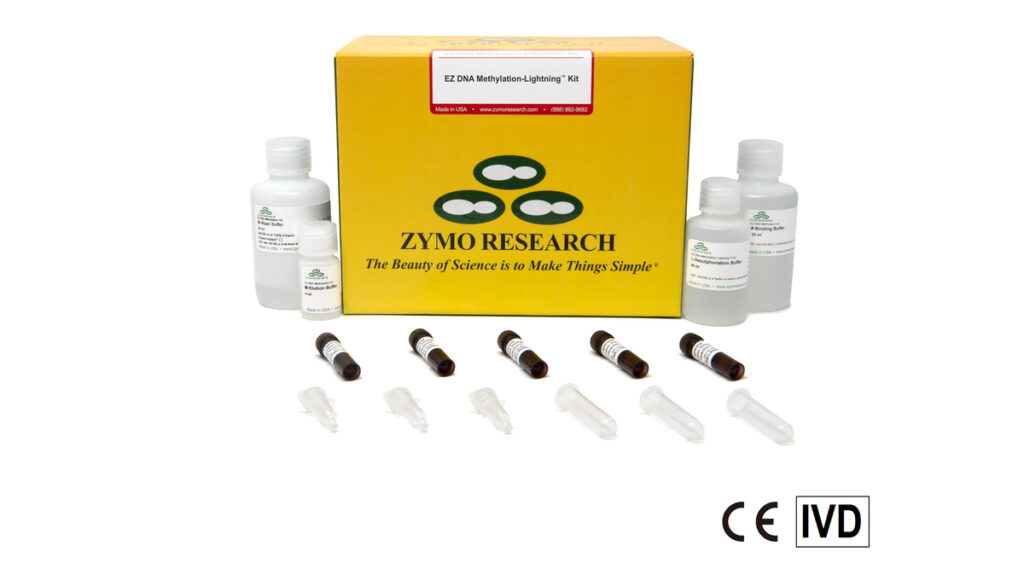 Zymo Research’s EZ DNA Methylation-Lightning Kit has been granted the CE IVD Mark which allows the technology to be distributed within the European Union (EU) common market.

Zymo Research announced that its EZ DNA Methylation-Lightning Kit has received the CE IVD Mark allowing the technology to be distributed within the European Union (EU) common market. Chemical treatment of DNA with bisulfite is the prerequisite for many methylation-based diagnostic assays. Clinical diagnostic and screening tests, particularly those for cancer and developmental diseases, are now utilizing methylation profiling of DNA to detect the presence of disease and guide treatment.

The established, proven bisulfite-treatment chemistry from Zymo Research has been highly successful with clinical samples due to its robust and efficient (C)ytosine to (U)racil conversion chemistry that also minimizes DNA fragmentation and degradation during the process. Desulphonation and cleanup of “converted DNA” are performed using a unique spin technology, allowing ultra-low elution (10 µl) volumes. The kit achieves the highest conversion efficiencies for the most accurate downstream methylation analysis. The EZ DNA Methylation-Lightning Kit features a ready-to-use conversion reagent, which streamlines the workflow for completion in a little over an hour. The kit is available in spin-column and high-throughput 96-well formats.

“The scientists at Zymo Research are always working to streamline and simplify workflows for our customers. The EZ DNA Methylation-Lightning Kit is one example of this philosophy,” said Marc Van Eden, Zymo Research’s Vice President of Business Development. “The kit consolidates many of the labor-intensive steps required for precise, complete bisulfite conversion of DNA making an otherwise cumbersome workflow user-friendly and consistent time after time. This is particularly critical for assay reproducibility in sensitive analytical processes such as Next-Gen sequencing.”