HOW TO DESIGN PRIMERS FOR PCR EXPERIMENTS

Primer design is a critical step in the design of a good real time PCR experiment. There are many elements to consider when designing primers that can help minimize troubleshooting down the line. Here are important recommendations on creating specific and effective primers for several types of PCR assays.

Polymerase chain reaction (PCR) is a biochemical process that uses repeated cycles of heating and cooling to amplify a genetic region of interest, called the amplicon. In each cycle the double stranded DNA is first denatured and then cooled, allowing short oligonucleotide primers to anneal to the 3’ end of each DNA strand of the amplicon. These primers are then used by the DNA polymerase to build new complementary strands, which will result in the doubling of the number of DNA molecules of the targeted DNA sequence for each PCR cycle. While this system is incredibly useful to amplify and precisely quantify a gene of interest, there are several obstacles that can lower primer efficiencies and jeopardize your experiment. Here are the top recommendations for how to design primers for PCR and real time quantitative PCR (qPCR), reverse transcription quantitative PCR (RT-qPCR), bisulfite PCR, and methylation specific PCR (MSP). 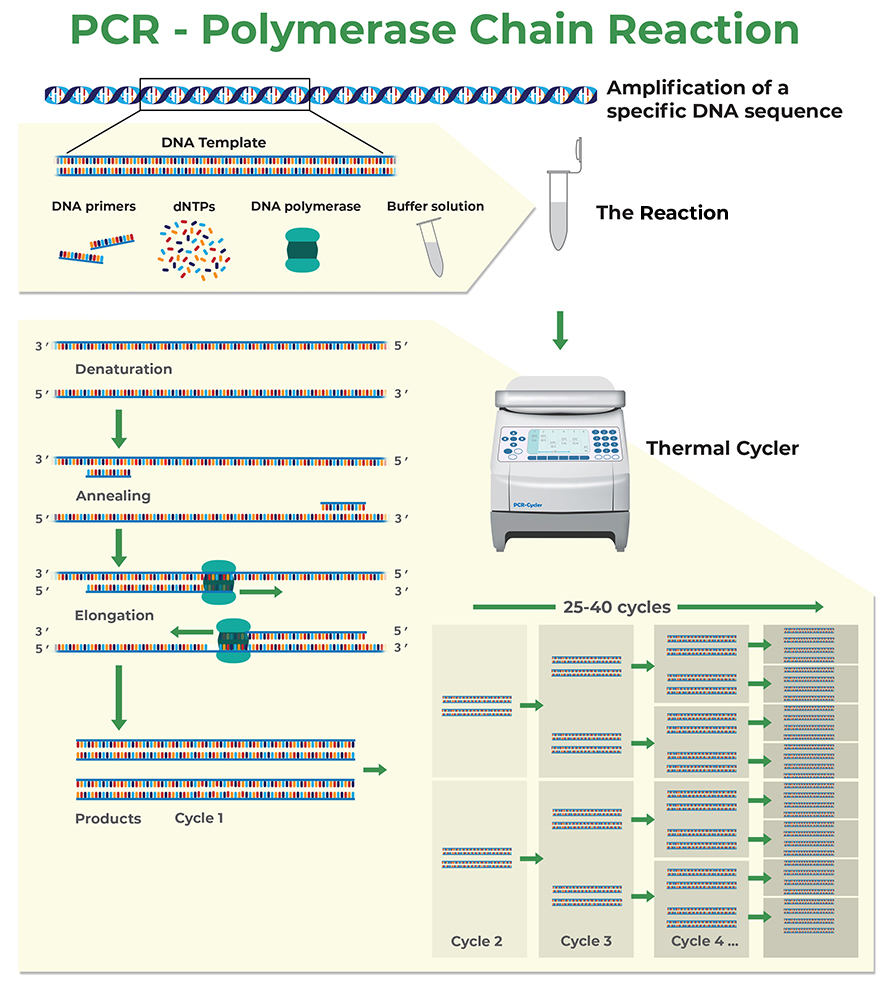 Figure 1. Polymerase chain reaction (PCR) consists of many heating and cooling cycles that allow the denaturation of double stranded DNA, annealing of oligonucleotide primers, and elongation of new complementary strands by DNA polymerase. The copy number of the amplicon increases exponentially with each PCR cycle.

Considerations for both primers and probes:

The above tips are also applicable to a slightly different form of PCR called quantitative reverse transcription PCR (RT-qPCR). RT-qPCR allows you to perform PCR starting from RNA instead of DNA. RNA is first converted into cDNA (reverse transcription, or RT), and then amplified with PCR as described in the previous section. During maturation, RNA is subjected to splicing, which removes introns from pre-mRNA sequences. For this reason, mRNA sequences differ from genomic DNA sequences. Thanks to the splicing it is possible to design a PCR assay specific for the RNA transcript.

Zymo Research provides high-quality reagents for efficient cDNA synthesis and robust qPCR amplification that can simplify and improve your RT-qPCR workflow. Using the ZymoScript RT PreMix Kit (Catalog No. BioSite-R3012), high yield, full-length cDNA synthesis can be achieved in less than 15 minutes. Alternatively, fast reverse transcription and highly sensitive qPCR amplification can be completed in a single reaction using the ZymoScript One-Step RT-qPCR Kit (Catalog No. BioSite-R3014). The ZymoScript One-Step RT-qPCR Kit is compatible with both SYBR Green and TaqMan probe-based assays to allow ultimate flexibility. Both kits use blue tracking dye to simplify the reaction set-up and save time. RT-qPCR design and set-up has never been more convenient and powerful. For more information on the new ZymoScript product line, please reach out to our support team at support@nordicbiosite.com or call +46 8 5444 3340. 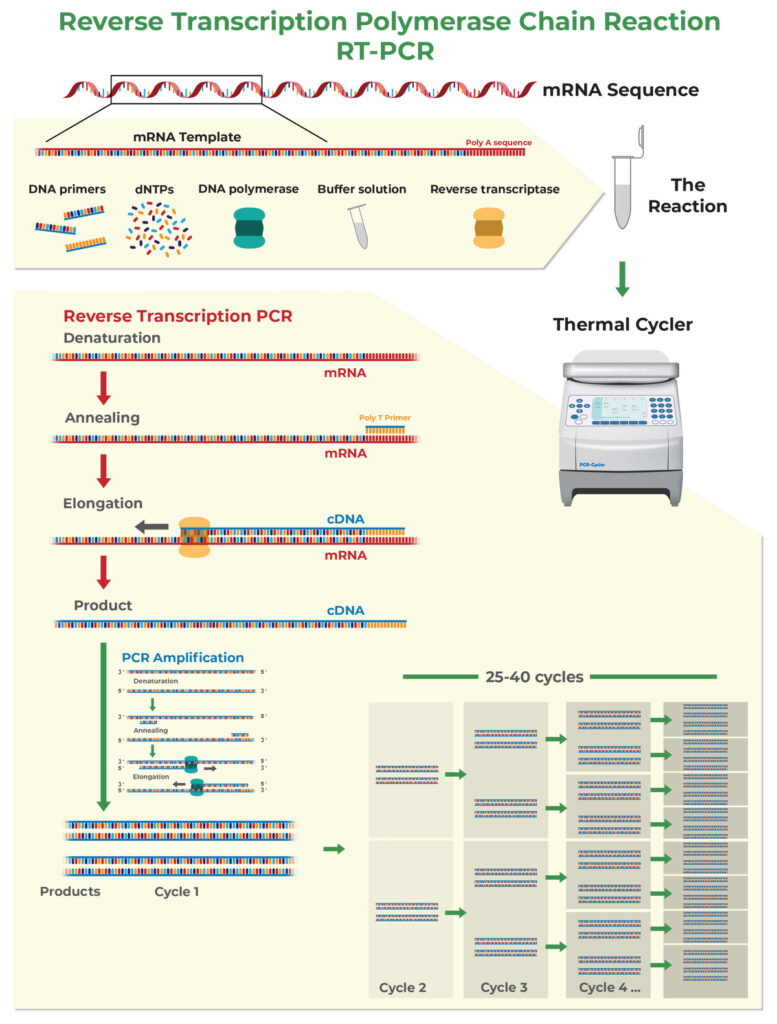 Figure 2. RT-qPCR begins with a reverse transcription step that converts mRNA to cDNA using a reverse transcriptase enzyme. After the mRNA is converted to cDNA, the PCR reaction proceeds with cycles of denaturation, annealing, and extension to amplify the target region.

Methylation Specific PCR (MSP) relies on amplification to assess the methylation status at specific CpG sites after bisulfite conversion. Success with this system depends on the differential amplification of the template using methylated (M) and non-methylated (U) primer sets. While most of the considerations for MSP primer design are identical for those for bisulfite PCR, CpG sites within the primers are treated differently. Bisulfite PCR examines the methylation status of all the CpG sites present in a specific region, while MSP assesses the methylation at a single CpG site complementary to the 3’ end of the primer sequence.

For more information on MSP, see the MSP section of the Bisulfite Beginner Guide. 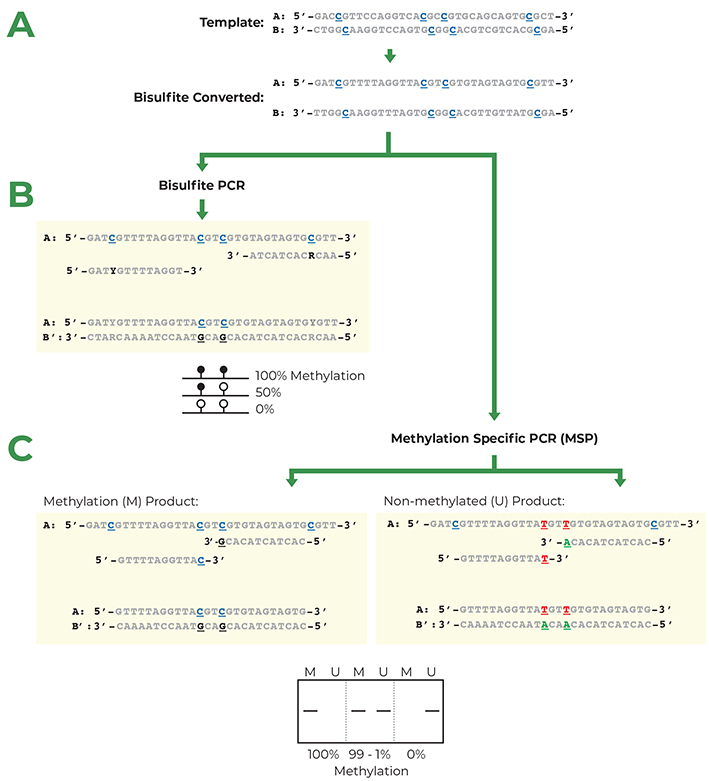 Figure 6. Flowchart of primer design for bisulfite PCR and Methylation Specific PCR (MSP). (A) Following bisulfite treatment, the two converted strands of the DNA template are no longer complementary. It is important to note that only one strand will be amplified with any given primer set. This is illustrated by the following examples: (B) Primers for Bisulfite PCR are designed for subsequent sequencing and analysis of cytosines within the amplicon. CpG sites within the primers should be avoided or located at the 5′-end with a mixed base at the cytosine position (Y= C/T, R= G/A). Sequencing data is commonly represented by a “lollipop” plot where closed circles represent methylated cytosine positions and open circles non-methylated ones. (C) Primers for Methylation Specific PCR (MSP) are designed to target and assess the methylation status at specific CpG sites. CpG sites within the primers must be located at the 3’-end to increase their specificity for methylated (M) or non-methylated (U) templates. Completely methylated or non-methylated templates will generate a single amplicon from only their representative primer set following MSP. Samples with mixed methylation will be amplified by both primer sets.