The CAM family: A new target for monitoring or treating cancers? 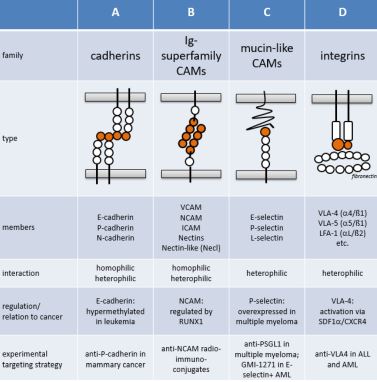 Many cellular functions are directly linked to cell adhesion such as signal transduction, cellular communication and recognition, embryogenesis, inflammatory and immune responses, apoptosis and some of them also act as viral receptors. [Cohen MB, Am J Clin Pathol. 1997, 107(1):56-63]. The metastatic dissemination of tumor cells is the leading cause of morbidity and mortality in patients with cancer since it designates the transition from a localized, potentially curable to a generalized, usually incurable disease. [Makrilia N, Cancer Invest. 2009, 27(10)]. Across the years, it has become evident that the adhesion properties of neoplastic cells play a pivotal role in the development and progression of cancer. [Okegawa T, Acta Biochim Pol. 2004;51(2):445-57] [Windisch R, Cancers 2019, 11(3), 311].

Changes in the expression or function of CAMs have been associated with alterations in the adhesive or signalling status of tumor cells, allowing them to acquire a more motile and invasive phenotype prognostic biomarkers or as potential therapeutic targets in malignancies. Additionally, many of CAMs can be cleaved and released by proteolytic cleavage activity, and their soluble forms were found to be increased in serum levels of cancer patients. Even if elevated levels of soluble CAM are also observed in bacterial and viral infections or in acute inflammation, some of them have been identified to be interesting prognostic markers of cancer progression, such as EpCAM, described to be upregulated in colorectal cancer with clinical relevance. [Han S, Ebiomedicine 2017; 20:61–69].

Diaclone has been interested for many years in the adhesion molecules and can provide antibodies against all of the selectin and integrin families, most of IgSF CAM family and against EpCAM, H-CAM, M-CAM, and BL-CAM. Knowing that the soluble form levels could become an innovative tool of cancer monitoring, Diaclone has also developed ELISA kits for measuring serum levels of a wide range of sCAMs.