Flow cytometry is a powerful technique routinely used for analyzing complex cell populations based on their physical and chemical characteristics. When combined with fluorescent labels, cellular components can be monitored and quantitatively assessed according to various parameters such as size, internal complexities or through expression of specific cellular markers (e.g. lipids, proteins, or DNA content). In applications utilizing DNA binding stains, flow cytometric analysis has the capacity to screen, characterize and fluorescently sort entire cell populations according to cellular DNA content. This is particularly important in resolving cell distribution within the major phases of the cell cycle, estimating the frequency of apoptotic cells characterized by fractional DNA content and revealing ploidy of the analyzed cell populations [1]. Data collected from this approach has proved significantly useful in fields of research focusing on cell growth and development, proliferation and tumorigenesis, cell cycle regulation, drug discovery and oncology.

The eukaryotic cell cycle includes a series of events that are involved in the growth, replication and division of cells. It describes the progression of a cell through a cycle of division, which consists of cytoplasmic and nuclear events controlled by cyclin-dependent kinases and their cyclin partners [2]. In a given population, cells will be distributed among three major phases of the cell cycle: the G0/G1 phase, the S phase and the G2/M phase. The distribution of cells within these phases of the cell cycle is contingent upon their differences in cellular DNA content, and with the aid of DNA binding stains these variations can be quantitatively assessed with high sensitivity [3].

Analyzing cell cycle progression in live cells requires the use of cell-permeant DNA binding dyes. In this approach, cells are incubated with a dye that binds stoichiometrically to DNA. This means that the dye binds in proportion to the amount of DNA present in the each cell, and when excited by a laser will generate a signal proportional to its cellular DNA content. Traditionally, flow cytometric cell cycle analysis in live cells was performed using Hoechst dyes. Although cell-permeant, Hoechst dyes require ultraviolet excitation which is damaging to cellular DNA and can increase background interference in other channels.

To address this limitation, AAT Bioquest® has developed three Cell Meter™ Fluorimetric Live Cell Cycle Assay Kits for use with the common 405 nm violet laser or the 488 nm blue laser. These assays are ideal tools for flow cytometric analysis of DNA content in live cells as they progress through various phases of the cell cycle. Utilizing the same approach as aforementioned, cell populations are incubated with a stoichiometrically binding, cell permeable DNA dye. Upon DNA binding, the dye will undergo a significant fluorescence enhancement, emitting a signal that is proportional to cellular DNA mass. The percentage of cells in a given sample that are in G0/G1, S and G2/M phases, as well as the cells in the sub-G1 phase prior to apoptosis can be determined by flow cytometry. The collected fluorescence data can be used to generate a histogram illustrating the distribution of cells in each phase of the cycle (Figure 1). 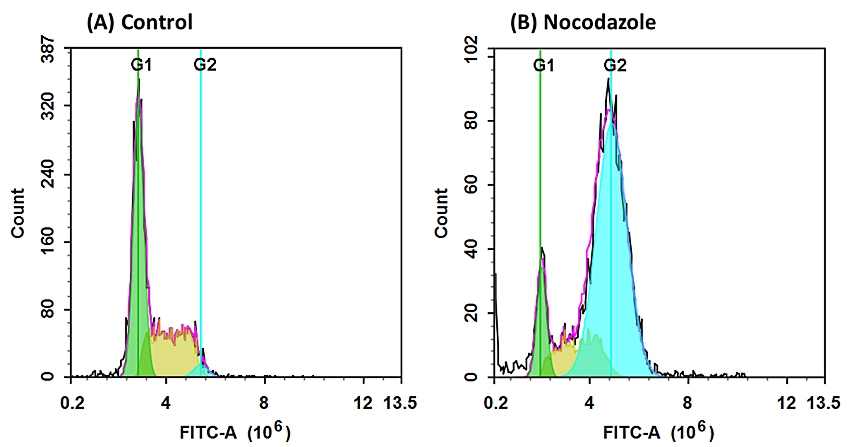 Protocols for labeling live cell populations with Cell Meter™ Fluorimetric Live Cell Cycle Assays are simple and robust. Because these dyes are DNA selective, RNAse treatment of cell populations is not required to reduce background interference. Additionally, Nuclear Violet™, Nuclear Green™ CCS1 and Nuclear Red™ CCS2, the dye component of each kit, are provided as pre-formulated solutions and therefore do not have to be reconstituted. Simply incubate cells with the dye and then monitor the cell population using a flow cytometer, without washing.

Another distinct advantage of Cell Meter™ Fluorimetric Live Cell Cycle Assays is the capacity for multiplexing applications in flow cytometric analysis. Cell Meter™ Fluorimetric Live Cell Cycle assays are available in three distinct color choices for use with violet or blue laser. These options allow researchers the flexibility to designate other channels on their flow cytometers for analyzing different parameters. The Nuclear Violet™ stains take advantage of the commonly available 405 nm excitation source, while Nuclear Green™ CCS1 and Nuclear Red™ CCS2 stains utilize the 488 nm excitation source. This enables simultaneous co-staining of the cell population for other parameters such as analysis of GFP cells, CFSE cell tracing, cell sorting and immunophenotyping. Fluorophores under consideration should have minimal spectral overlap to reduce any bleed-through or spill-over effects.

While flow cytometric analysis of DNA content may seem like a simple application, many factors influence the measurement. Instrument performance, sample preparation and acquisition, and the manner in which data is analyzed can have significant effects on measurement [5]. Prior to cell cycle analysis, ensure that the flow cytometer is properly calibrated, and optimize the conditions for cell preparation, labeling acquisition and analysis.