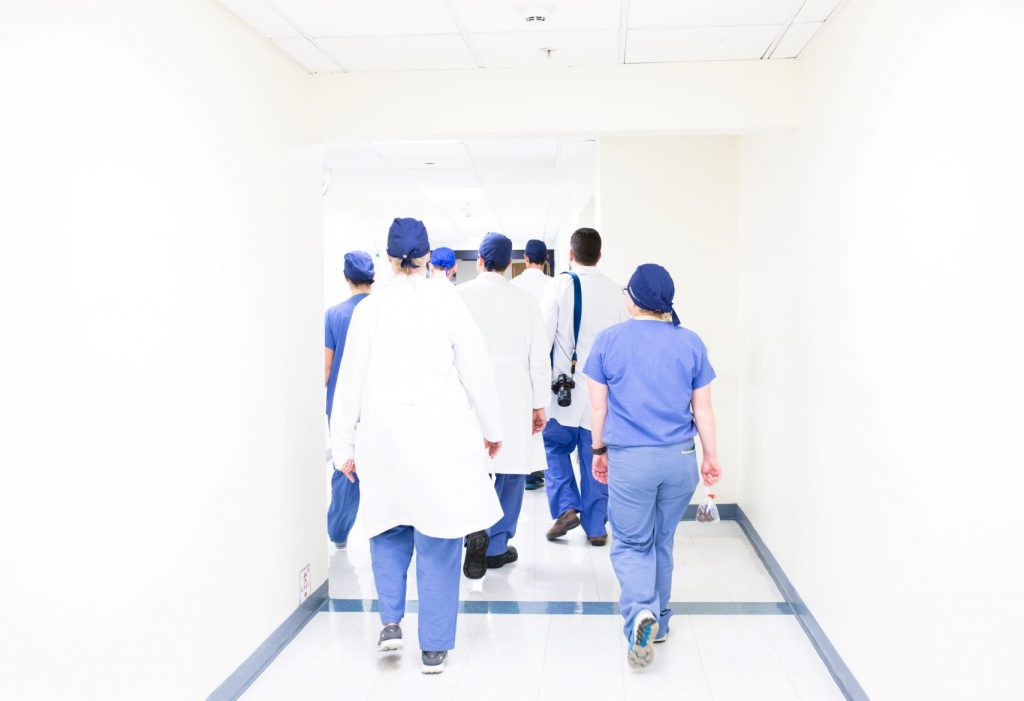 Over 1 million women are diagnosed with breast or ovarian cancer each year, and approximately one in eight women (~12%), will be diagnosed with breast cancer in her lifetime. However, 5-10% of these women carry genetic mutations in either the BRCA1 (Breast Cancer Antigen 1) or BRCA2 genes, leading to a significantly higher risk— it is estimated that ~60% of women with BRCA1 mutations and over 45% of women with BRCA2 mutations will develop breast cancer before age 70. BRCA mutations are also associated with a lifetime 30-50% risk of developing ovarian cancer as well as an increased risk of pancreatic, stomach, laryngeal, fallopian tube and prostate cancer.

Role of BRCA and PARP in DNA repair

Double-stranded DNA inside the nucleus constantly undergoes damage caused by ionizing radiation, UV light, and oxidative stress. If not repaired, this damage accumulates, causing genomic instability and finally leading to tumorigenesis. BRCA1 and BRCA2 are distinct tumor suppressor proteins that play a critical role in the error-free repair of double stranded DNA repair via homologous recombination. BRCA1 and BRCA2 work together to protect the genome from double strand DNA damage. BRCA1 acts in checkpoint activation and DNA repair (both homologous recombination and nonhomologous end-joining), while BRCA2 mediates the core mechanism of homologous recombination. If either BRCA1 or BRCA2 is mutated, damaged DNA is not repaired properly, which greatly increases the risk for cancer.

PARP (Poly ADP Ribose Polymerase) is another DNA binding protein involved in the repair of chromosomal damage caused by UV-light, radiation, or genotoxic drugs used in chemotherapy. Unlike BRCA 1&2, which repair double stranded breaks in DNA, PARP enables repair of mismatched bases and single stranded DNA breaks, via the base Excision Repair pathway. PARP binds to damaged DNA at single-strand DNA lesions, leading to the PARylation of nuclear proteins and recruitment of DNA repair proteins such as XRCC1. PARP inhibitors prevent this repair.

PARP inhibitors are used as cancer drugs to selectively target tumors with BRCA1 or BRCA2 mutations, based on exploiting the concept of synthetic lethality. Synthetic lethality is defined as when mutations in two or more genes leads to cell death, whereas a deficiency in only one of these genes does not. BRCA1/2 defective cancers are intrinsically sensitive to PARP inhibitors, since PARP inhibition causes an increase in DNA single-strand breaks, which are converted during replication to irreparable toxic DNA double-strand breaks. These double-stranded DNA breaks would normally be repaired by homologous recombination, but the BRCA-defective tumor cells are unable to make these repairs, resulting in chromosomal instability, cell cycle arrest and eventually apoptosis. Normal cells, with presumably intact homologous recombination pathways, are not significantly affected by PARP inhibitors.

PARP inhibitors have been invaluable for treating tumors with underlying homologous recombination deficiencies. The FDA has approved four PARP inhibitors for cancer treatment, starting with AstraZeneca’s Olaparib in 2014. These PARP inhibitors are most often used as monotherapies for the treatment of ovarian cancer (Olaparib, Rucaparib, Niraparib) and BRCA-mutant breast cancers (Talazoparib, Olaparib). Recently olaparib was also approved for use with pancreatic cancer in patients with BRCA1/2 germline mutations, and similarly, Niraparib has been approved for fallopian tube or peritoneal cancers.

PARP inhibitors have transformed treatment for breast and ovarian cancers, but their use has been mostly limited to the small  proportion of patients who have BRCA mutations. Unfortunately, ~75% of women with recurrent ovarian cancer and up to 90% of breast cancer patients have wild-type BRCA tumors, which are more difficult to treat and associated with poorer outcomes.

Fortunately there is now evidence to support using PARP inhibitors to successfully treat cancers without BRCA mutations, especially in tumors associated with high levels of replication stress such as small-cell lung cancer. While wild-type BRCA cancers are less sensitive to PARP inhibition, these cancers can still respond to higher concentrations of PARP inhibitors, resulting in cell death.

Recent research has identified an alternate mechanism by which PARP inhibitors attack cancer, suggesting these drugs may be applicable to the much wider group of patients without BRCA mutations. In addition to disrupting DNA repair, PARP inhibitors block a nucleolar protein called DDX21 that is required for the production of ribosomes. Without PARP1, the nucleoli leak DDX21 into the nucleus, blocking the transcription of ribosomal RNA and preventing protein production in the cancer cell, leading to cell death. DDX21 levels may be a therapeutic marker to determine which cancers are most responsive to PARP inhibitors.

Over time, some patients develop resistance to PARP inhibitors, and others develop severe side effects such as myelosuppression. A number of researchers are investigating using PARP inhibitors in combination with other drug therapies to improve patient response. One promising approach is to combine PARP inhibitors with inhibitors of other key targets involved in the DNA damage response, such as ATR, ATM, CHK1/2, WEE1, and DNA-PK. Early data from clinical trials suggest these chemotherapy combinations may help to overcome resistance seen with PARP inhibitor monotherapies.

Another line of attack for treating wild-type BRCA tumors is to suppress BRCA activity with PI3K inhibitors, making the cancer cells become more susceptible to PARP inhibitors. Similarly, researchers are pairing PARP inhibitors with the BET bromodomain inhibitor JQ1 which increases DNA damage, as a potential therapy for pancreatic cancer.

PARP inhibitors can also activate the immune system. The accumulation of DNA damage activates the cGAS/STING pathway, causing the cells to release proinflammatory cytokines. These cytokines activate dendritic cells, which attract T cells to the site of the tumor. PARP inhibitors also possess anti-angiogenic properties by decreasing the activity of critical pro-angiogenic factors such as HIF1α and VEGF. VEGF inhibitors induce hypoxia, and hypoxia triggers the homologous recombination deficiency, which works in combination with PARP to kill cancerous cells and promote tumor shrinkage. Antibodies to VEGF can sensitize tumors to PARP by downregulating BCRA1/2, and early results of clinical trials suggest that combination therapies with VEGF antibodies may improve the results of PARP inhibition even in wild-type BRCA patients.

Immunotherapy has transformed the treatment paradigm for many cancers, and anti-CTLA-4 and anti-PD-1/PD-L1 treatment exhibit potent tumor-killing in ovarian and triple-negative breast cancer. PARP suppresses the transcription of PD-L1 by PARylating STAT3,  and PARP inhibition therefore increases PD-L1 expression in cancer cells. Importantly, the blockade of PD-L1 sensitizes PARP i nhibitortreated cancer cells to T-cell killing.

The combination of immune checkpoint blockade and PARP inhibition appears to be synergistic. While PD-1 antibody alone had no effect on the growth of BRCA-negative ovarian tumor models, the combination of olaparib and PD-1 antibody treatment resulted in sustained control of tumor growth. Similarly, CTLA-4 blockade has also been shown to synergize therapeutically with PARP Inhibition in BRCA1-deficient ovarian cancer.

These and other studies suggest that combination of PARP inhibitors with checkpoint inhibitors such as PD-1/PD-L1 or CTLA4 may provide better therapeutic strategies, and there are numerous clinical trials in progress for ovarian, breast and prostate cancer that combine PD-1, PD-L1, or CTLA4 antibodies with PARP inhibitors.

A family of 18 different PARPs has been identified, but only some of these isozymes participate in DNA damage repair. This variation in selectivity can be critical for minimizing side effects and understanding the mechanism of action. For example, Olaparib, which was originally described as a PARP1 and 2 inhibitor, has recently been shown to be a potent inhibitor of PARP3, while Niraparib (Tesaro) shows high selectivity for PARP1 and PARP2 but only weak PARP3 inhibition, and ME0328 is a selective PARP3 inhibitor.

Similarly, some PARP inhibitors have been shown to function not only by inhibiting the catalytic activity of PARP, but also by forming a complex with the PARP enzyme and “trapping” it to the DNA at the site of DNA damage. In addition to inhibiting DNA repair, PARP trapping has the added effect of interfering with DNA replication, which is preferentially cytotoxic for fastgrowing
cancerous cells.