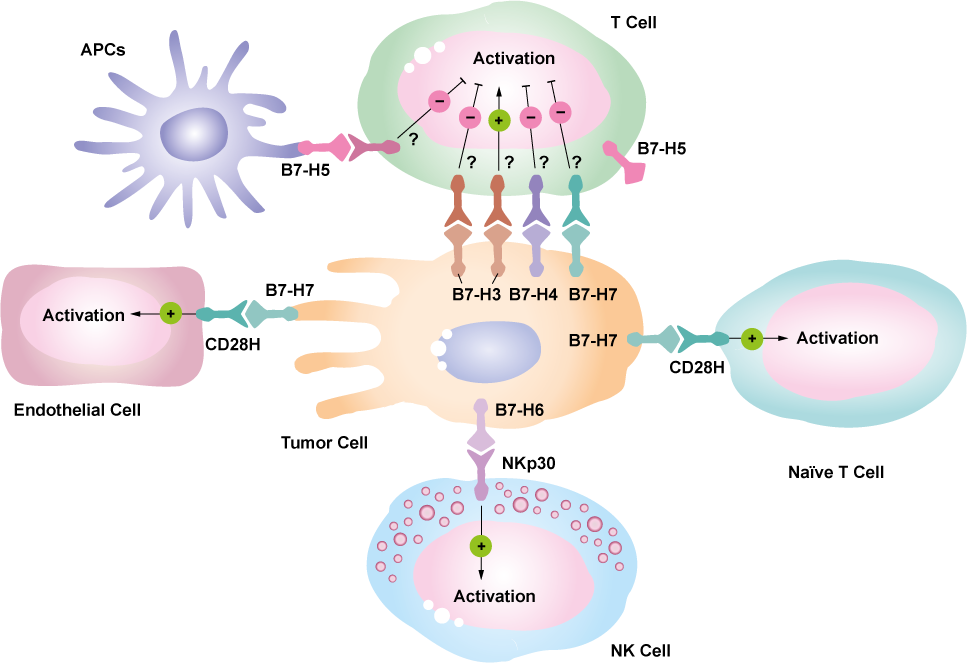 Targeting immune checkpoint regulators such as programmed cell death 1 (PD-1)/PD-1 ligand 1 (PD-L1) and cytotoxic T lymphocyte antigen 4 (CTLA-4) has achieved notable benefit in a variety of cancers. Recently five new B7 family ligands, B7-H3, B7-H4, B7-H5, B7-H6 and B7-H7, were identified, all of them possibly being of high interest in immunotherapy research.

B7-H3 [CD276] has a co-inhibitory function on T cells. Its expression on either tumor cell or diffuse tumor vasculature is significantly associated with an increased risk of death and bad outcome. Targeting B7-H3 not only enhances anti-tumor immunity but also inhibits tumor angiogenesis.

B7-H4 plays a significant role in the “immune escape” of tumors and is a potential therapeutic target for the treatment of cancer. It plays an important role in the T cell-mediated immune response as a negative regulator. The ligation of B7-H4 to unidentified receptors results in the inhibition of TCR-mediated T cell proliferation, cell-cycle progression and IL-2 production.

VISTA [V-domain immunoglobulin suppressor of T cell Activation; B7-H5] is type I Ig membrane protein homologous to PD-L1. VISTA is mainly expressed on hematopoietic tissues (spleen, thymus and bone marrow) and on myeloid cells. VISTA is a new negative checkpoint regulator that potently suppresses T cell activation. It delivers a co-inhibitory impact on T cell response.  Recent publications have reported that a recombinant VISTA protein needs to be multimerized to be active as a soluble ligand. The protein VISTA (mouse):COMP (mouse) (with the extracellular domain of mouse VISTA fused to the pentamerization domain from the cartilage oligomeric matrix protein (COMP), but not VISTA-Fc, has been shown to function as an immunosuppressive agonist in vivo inhibiting the proliferation of CD4+ T cells. Additionally, a new function of the protein P-selectin glycoprotein ligand-1 (PSGL-1) as a new receptor for the immune checkpoint VISTA has been shown. Multimer VISTA binds PSGL-1 expressed on leukocytes at acidic pH, but not at the physiological pH 7. VISTA – PSGL-1 interaction shows that immune response can be regulated by acidic environments found in tumors.

B7-H6 (also known as NCR3LG1) is a ligand for NK cell activating receptor NKp30. It is expressed on tumor cells but can also be induced by inflammatory stress in healthy cells. B7-H6 has been validated as a potential target for antitumor immunotherapy strategies in tumor-bearing mice. The expression of B7-H6 is significantly correlated with post-operative prognosis in cancer patients and  with distant metastasis status.

B7-H7 is widely expressed in human malignancies and its expression is associated with poor prognostic factors. Targeting B7-H7 not only benefits antitumor immunity but also inhibits tumor angiogenesis. For B7-H7, a T cell co-inhibitory role and a co-stimulatory role have been reported, most probably based on two counter receptors, one CD28H and the other unknown.