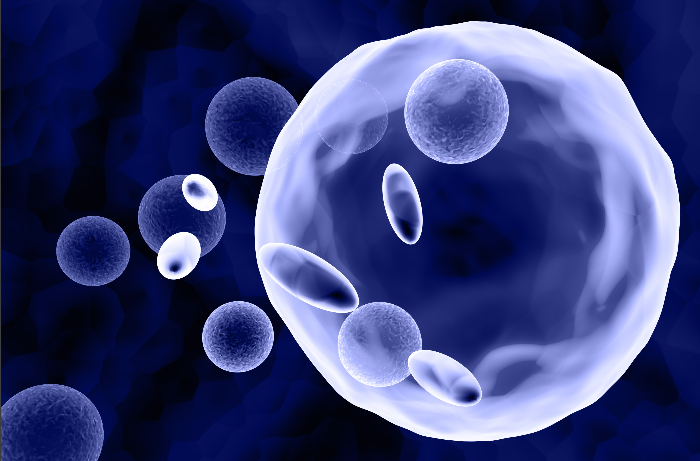 Annexin V is a 35 kDa phospholipid-binding protein. Its strong calcium-dependent affinity for phosphatidylserine (PS) can be used to identify cells undergoing apoptosis. In viable cells, negatively charged PS residues are located on the cytosolic surface of the plasma membrane. However, during early apoptosis,  cells loose plasma membrane asymmetry and PS residues translocate to the outer leaflet of the membrane, where they can be detected by fluorescently labeled annexin V.

Annexin V conjugated to iFluor™ dyes provide a fast and reliable method for detecting externalized PS, a key characteristic in early-stage apoptosis. The superior brightness and photostability of Annexin V iFluor™ probes significantly outperforms most Alexa Fluor® and other spectrally similar annexin v conjugates. Annexin V iFluor™ conjugates are useful for live cell imaging, immunofluorescence, and flow cytometry, and can be combined with other dyes, such as nucleic acid stains, to accurately assess mixed populations of apoptotic, necortic and dead cells.

Annexin V conjugated to mFluor™ dyes, PacBlue, APC and PE are valuable tools for measuring apoptosis by flow cytometry. These conjugates can be combined with other dyes, such as nucliec acid stains, to accurately assess mixed populations of apoptotic, necortic and dead cells. We offer annexin V conjugates for flow cytomtery as stand alone reagents or easy-to-use kits.

The benefits of our annexin V mFluor™ conjugates include:

Cell Explorer™ fluorescence imaging kits are a set of tools for labeling cells for fluorescence microscopic investigations of cellular functions. The effective labeling of cells provides a powerful method for studying cellular events in a spatial and temporal context. This particular kit is designed to uniformly label live cells in green fluorescence for the studies that require the fluorescent tag molecules retained inside cells for relatively longer time. The cells can be fixed to retain the imaging pattern. The kit uses a non-fluorescent dye that carries a cell-retaining moiety. The dye becomes strongly fluorescent upon entering into live cells, and trapped inside live cells to give a stable fluorescence signal for relatively long time. The dye is a hydrophobic compound that easily permeates intact live cells. The labeling process is robust, requiring minimal hands-on time. It can be readily adapted for a wide variety of fluorescence platforms such as microplate assays, immunocytochemistry and flow cytometry. It is useful for a variety of studies, including cell adhesion, chemotaxis, multidrug resistance, cell viability, apoptosis and cytotoxicity. The kit provides all the essential components with an optimized cell-labeling protocol.