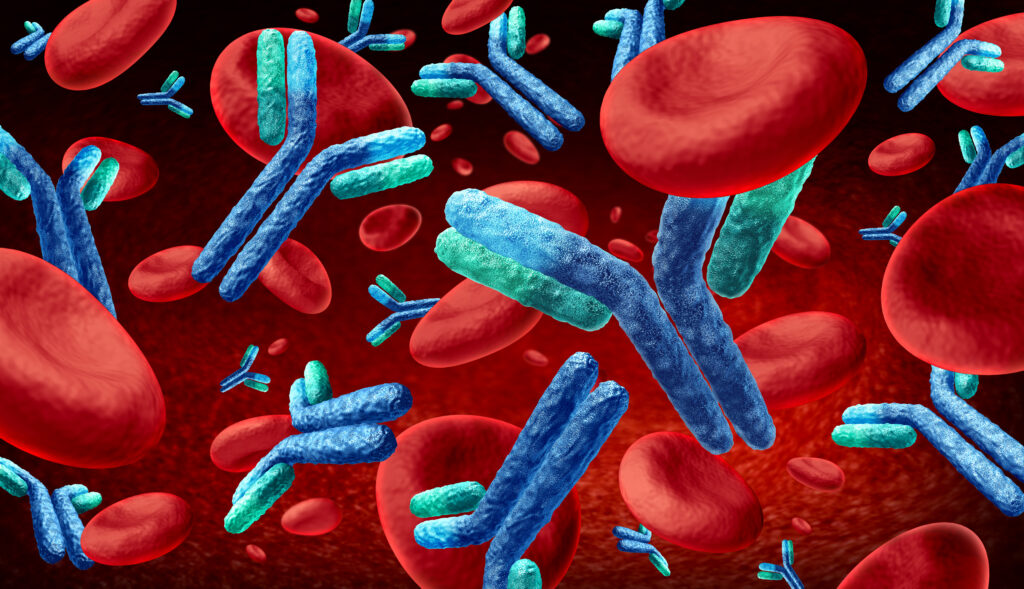 The 5 Steps of Recombinant Antibody Production

A typical rAb production workflow is carried out in five main steps:

Creation of an Antibody Gene Library

Before any rAb gene library can be made, the nature of the intended rAb must be defined. When it comes to cloning rAb genes, there are several different approaches to choose from. These include: cloning of full-length immunoglobulin G (IgG), cloning the Fab fragment only, cloning a single-chain variable fragment (scFv) only, or cloning single-domain fragments. Genes may either be cloned from genomic DNA of the species of interest, or they may be generated synthetically.

The full-length IgG approach – whereby both the heavy and light chains are cloned or synthesised and expressed – is straightforward and is a good choice when the intended rAb needs to resemble a full-length endogenous antibody. The Fab fragment is the antigen-detecting moiety of the antibody that remains after an Ig molecule is cleaved by the enzyme papain. Selective cloning of a Fab-encoding region is suitable for the production of monovalent rAbs, i.e., rAbs that only recognise one epitope.

scFvs are fusion proteins that comprise the variable regions of the light and heavy chains in a single-gene format. These regions are connected via a peptide linker that functions as an antigen-binding site. The small size of scFvs allows them to penetrate tissues easily, and makes them attractive as drug delivery vehicles or therapeutic antibodies. Single-domain antibody fragments are derived from the heavy chain antibodies of camelids and cartilaginous fishes (e.g., sharks). Their main advantages over scFvs include superior folding and stability owing to the absence of a peptide linker and their smaller size.

In all cases, the genes used may be engineered to generate custom tailored rAbs to suit the specific application needs. Once the rAb-encoding genes have been cloned, libraries are generated by expressing each cloned gene in a heterologous expression system. The expression system used should be easy to transfect and able to express, process and secrete the rAb efficiently. Phage, yeast, ribosome expression systems, as well as mammalian expression hosts such as chinese hamster ovary (CHO) and human embryonic kidney (HEK) cells are all widely used for rAb library generation.

The phage display method allows one to screen small antibody fragments within a large antibody library that is expressed in a phage expression system. Phage display was first described in 1985 by Nobel laureate George P. Smith, who demonstrated that filamentous phages can display peptides of interest on their surfaces if the DNA sequences encoding the peptides are inserted into the filamentous phage coat protein gene (1). In rAb production, phages display the products of the rAb gene library on their surface, which can then easily be screened against the intended rAb target to reveal suitable rAbs. Other display methods include ribosome display, which has an unmatched library capacity and is not hampered by transformation efficiency limitations (since it is a cell-free method), and yeast display, where the latter is attractive for human antibody expression given the similarities between yeast and mammalian protein expression.

Screening of displayed rAbs is carried out using a so-called panning technique that resembles an ELISA. The target antigens are coated in the wells of a microtitre plate to which the rAb-displaying phages are added. A rAb clone that binds a target antigen will remain in its well after washing while non-specific or non-binding Abs will be washed away. This process is then repeated several times to increase the likelihood of identifying the most specific and high-affinity rAb clones.

Once the best-performing rAb clone is identified in the previous step, the corresponding gene in the library can be PCR amplified to scale up rAb production in the chosen expression system, which, depending on target species and application requirements, may be E. coli, yeast or mammalian.

Prior to scale-up, the rAb gene may be engineered to include a tag to aid downstream purification. During and following scale-up, culture media composition and various chromatographic approaches may be explored to fine-tune rAb-binding properties.

We touched upon some of the major advantages of rAbs in our last blog post. Beyond the possibility to bypass the use of animals (when human genomic DNA or synthetic DNA is the source of the library genes), the reduced risk of genetic drift as compared to conventional mAb production, and the versatility to generate antibodies against virtually any target, rAbs offer additional advantages that make them attractive choices within applications that require high producibility and cost- as well as time-effectiveness.

rAb production offers much more control than mAb production via hybriboma technology, where injected antigens may be difficult to track once inside an animal. Because rAb production is defined by the sequences of the rAb library genes, and it occurs entirely in vitro, it is much more feasible to control all components than workflows involving complex living animals. It is also easier to favour the isolation of certain rAbs that react with certain antigens or have certain desired characteristics when the entire screening and selection process occurs in vitro.

rAb production can be completed in around 2 months while hybridoma technology on average requires at least four months to produce a suitable antibody. Thus, rAb production saves time and money compared to mAb production.

rAb production offers great flexibility with regards to isotype conversion. By adding the appropriate constant domain, a desirable rAb fragment can easily be converted into a different species, isotype or subtype as required.

Owing to their many advantages, the use of rAbs is increasing in diverse research and medical applications, including: